Hydra Ichi is lethal when attacking with his Poisonous Fangs. After returning to Scotland for training, he later came back to Athena's side to repel the Minion attacks. 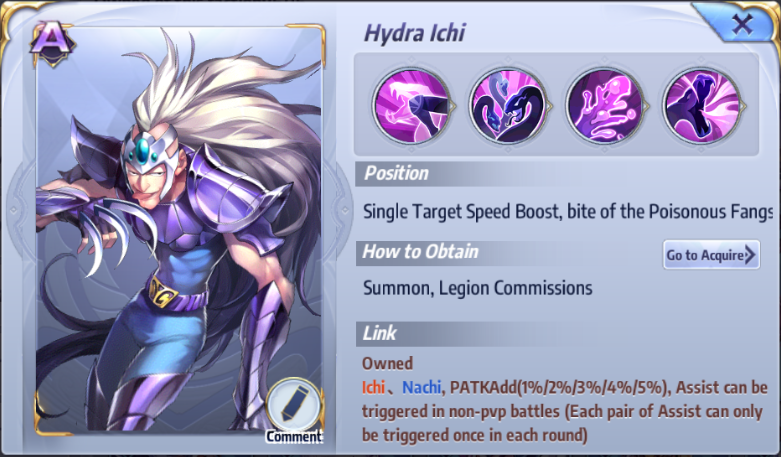 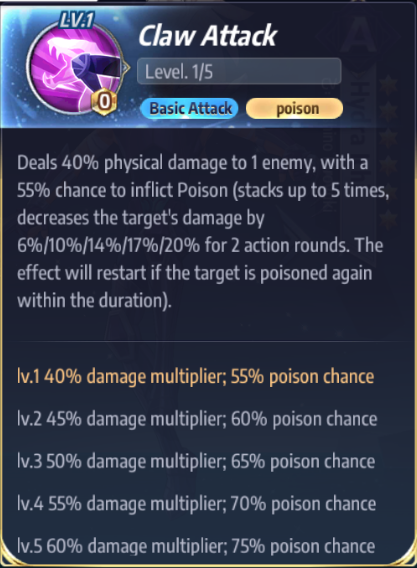 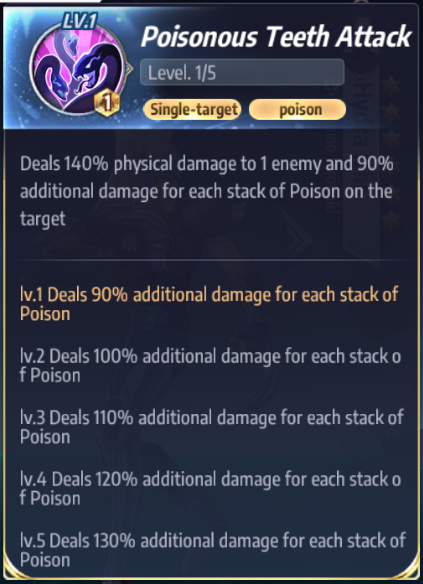 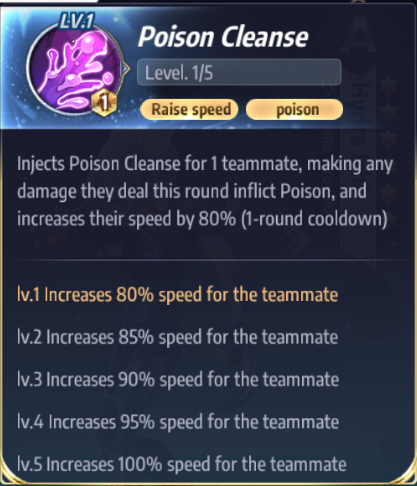 If Ichi's active attack kills an enemy, the poison effect on them will transfer to the enemy with the highest attack. 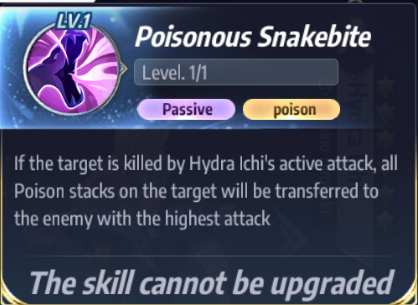 It wouldn't be far-fetched to call him the most powerful single target attacker in the game. Against an enemy with 5 stacks of poison, Ichi is capable of landing a massive attack with a 790% multiplier. But he needs to cooperate with other poison characters in order to reach his maximum potential. This is a relatively well-tested combination. As of now, the other poison characters are Ophiuchus Shaina and Pisces Aphrodite. In the current game meta, everything boils down to SPD and Ichi's top class base SPD of 300. No one is faster than him except for Kiki. He also has decent support capability, as he can speed up a single target by 80%. He is, however, a bit ugly, which is his only real shortcoming. 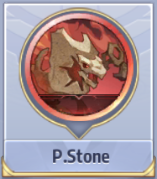 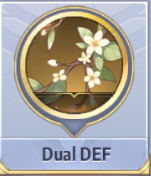 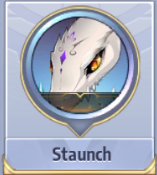 Chain of Hephaestus (deals an extra 40% damage against targets with more than 70% HP): 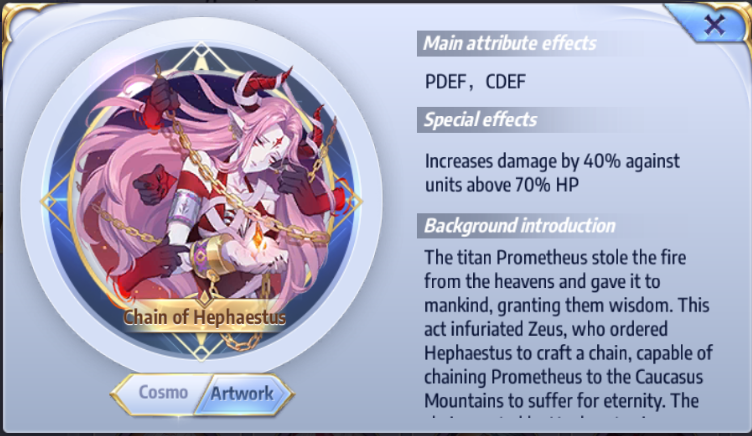 Ichi is pretty squishy, so it isn't too useful to try to increase his survivability. All Cosmo choices are focused on increasing his damage. Chain of Hephaestus is picked as the Special Cosmo because of Ichi's passive skill which enables him to transfer poison to other targets. This makes it so that when you focus down one enemy, you'll take down subsequent enemies in order of their damage.

Same strategy as with Delphinus Mii:

The nature of Ichi's skills makes it so that he requires other poison characters to work well, as he isn't the best for stacking poison himself. In the current meta, there are three other Saints capable of applying poison: Pisces Aphrodite, Ophiuchus Shaina and Sanctuary Warrior. Sanctuary Warrior is capable of applying poison at 0 cost but he is a C character with a base SPD of 114, thus he is not recommended. Aphrodite can only apply poison with his basic attack, and that's not even a guarantee. As Inflict Status Chance is not really needed for a poison combo, Ophiuchus Shaina is the best one to use with Ichi.

The dual-poison setup works great due to its low cost and high speed. Which is why it is a popular strategy in the current meta to pair him up with Yuzuriha.

PvP strategy: Start with June and Shaina. Ichi tries to poison an enemy with his basic attack (target their key supports such as generators and characters with high speed and low survivability). Shaina should increase her own SPD before speeding up her team. Then Xiaoling attacks the targets that have been attacked by Ichi. Shaina acts twice in the first turn and Ichi launches his basic attacks on the same target to apply 3 stacks of poison, giving him high burst damage during round 2. Xiaoling reduces the enemy's energy so they can't use their skills, indirectly protecting you from enemy skills. On the second turn, Ichi should be able to instakill an opponent.

The poison combo usually has terrifying single-target damage. There are generally two ways of dealing with this. One is to use June and Marin spread the damage dealt by these single-target attacks to your entire team. If you don't have June, just try to kill one of them as quickly as possible. The poison combo falls short when only one of the two poison characters are alive.