He was Ikki’s master on Death Queen Island and uses hatred as his power. In order to trigger the innermost hatred in Ikki, he told him the truth of the world and even killed his girlfriend Esmeralda. 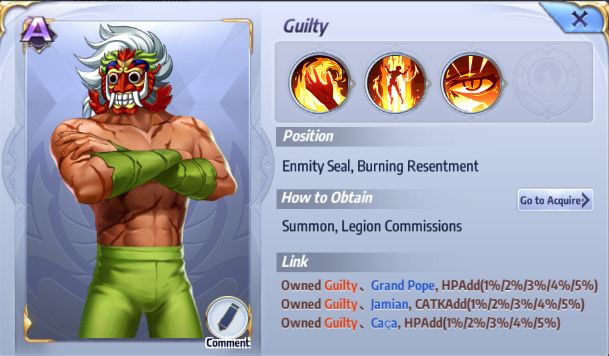 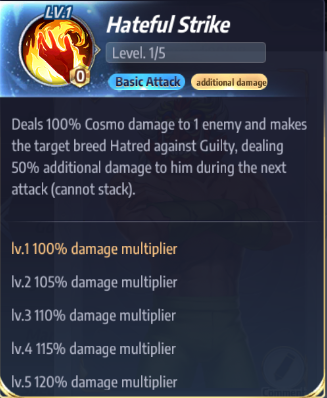 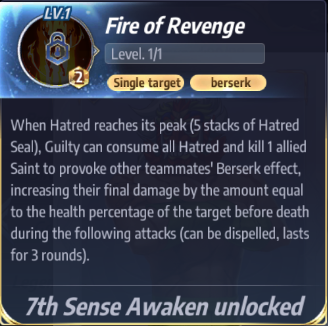 When his hatred reaches its peak (5 stacks of Hatred Mark) Guilty can spend all his hatred and kill 1 friendly unit, inciting a rampage in his remaining teammates. The ensuing attacks will have their damage increased equal to a percentage of the sacrificed Saint’s HP (can be dispelled and lasts for 3 rounds)

Guilty is consumed by hatred and he gains 2 stacks of Hatred Mark before acting, and 1 stack of hatred each time he is attacked. Each stack of Hatred Mark increases Guilty’s damage by 5% (7%/10%/12%/15%) and stacks up to 5 times. Guilty does not gain stacks while controlled.

Guilty is a very unique Saint in that he increases his own attack at the cost of a teammate. The more health his ‘friend’ had when killed, the stronger he gets. 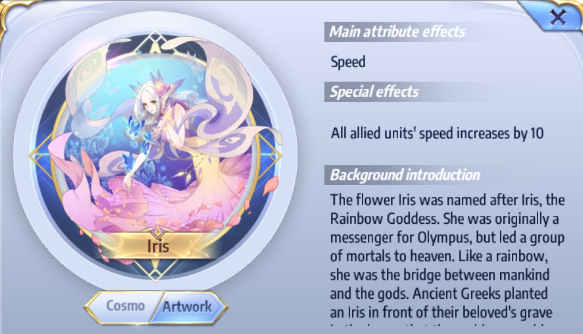 Guilty needs SPD, which is why New Moon is a good choice for his blue Cosmo. Iris enables him to quickly stack his mark.

When Guilty is at full Hatred, killing off Ikki and utilizing his ability to resurrect, enables you to trigger Guilty’s skill without really killing any Saint. Use the June and Marin combo to heal up and protect Ikki after he has resurrected and is weak.

Your best bet is simply to ignore him. Attacking him grants him Hatred, and it’s just asking to be killed. Just focus on the other damage dealers.