The agile Erda excels at using her blades for cutting evil, and her slashes are even capable of cutting the very air next to her enemies. [Fan Matrix] Is Erda’s favorite dance; she simply won't stop as long as there’s an enemy standing. 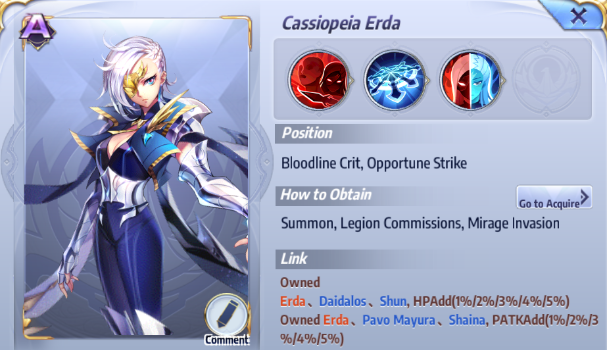 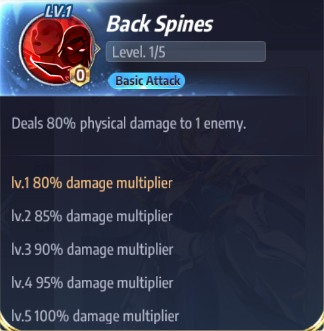 Tip: It is an extremely powerful skill when dealing killing blows, and will sometimes lead to a chain-effect, completely annihilating the enemy team. 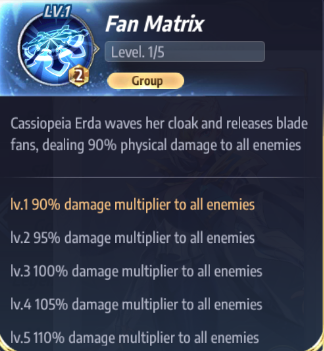 Tip: Keeping Erda’s SPD higher than everyone else will enable her to always go first, making SPD Cosmo less useful. Thus, it is advisable focus on her other attributes. 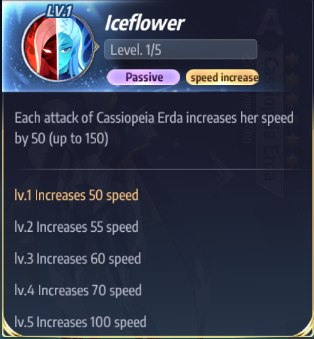 Erda’s skills capitalize on granting extra rounds. But to gain extra rounds, an enemy has to die. Whether you’re using single-target or AoE Saints, you should utilize their attack buffs, defense debuffs and damage buffs to try and one-shot your targets. If you have a sure kill, you can also consider leaving your enemy with a bit of HP, and finish them off with Erda.

Physical Stone has a lot of P.ATK, so coupling it with the P.Crit Cosmo Staunch further increases her damage capabilities. Her max damage will be lower than a pure crit build, but the average dps should be higher.

Utilize Erda’s SPD to quickly launch AoE attacks thereby reducing the enemy team’s SPD. Her damage is average and can be used as a damage support.

1.       Recommended lineup: Kiki + Cassiopeia Erda + Virgo Shaka + Leo Aiolia + Scorpio Milo
This lineup capitalizes on Erda’s SPD to pressure the enemy team, giving Shaka or another Saint a chance to control them. After which Aiolia coupled with Shaka can silence them and deal damage. Using damage dealers such as Milo or Aiolos may also make it possible to kill an enemy during the first round.

2.       Erda has great potential in PvP. She transforms from a low SPD Saint into an oppressive force. To fully utilize her, pair her with Saints that grant extra rounds, such as Luna and the Cosmo Water Curtain. Erda usually has to take three turns before she reaches high SPD and can begin to dominate. She’s very potent when it comes to reducing the SPD of enemies in PvP.

Cassiopeia Erda’s damage potential can be classified as S-rank. Her SPD also increases greatly during battle, but she has rather low HP, P.DEF and C.DEF. When facing her, be sure to deal with her quickly rather than leaving her for later. Her SPD and damage make her a difficult foe. You can also try to control her by using control Saints that act quickly, thereby reducing the number of attacks she can launch.